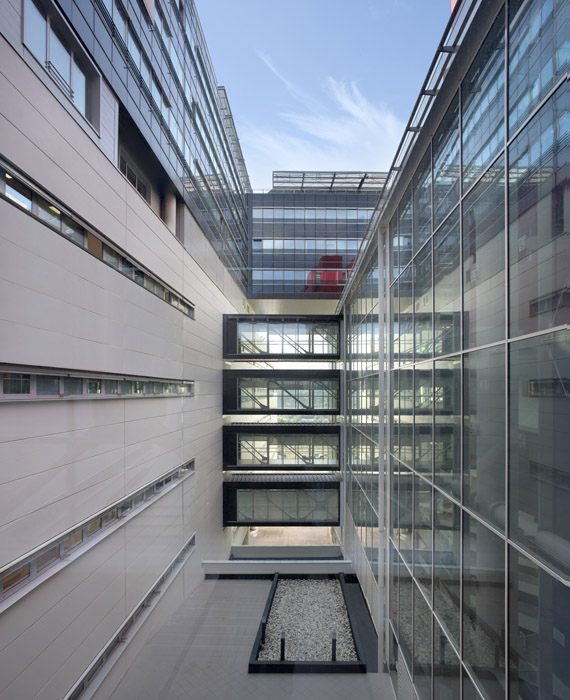 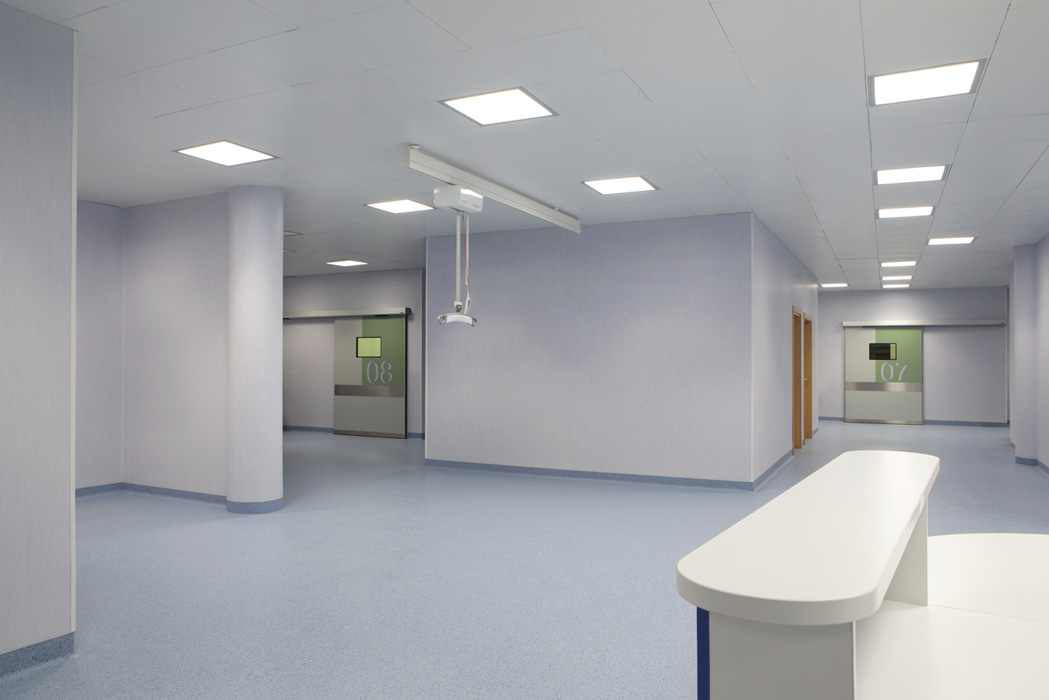 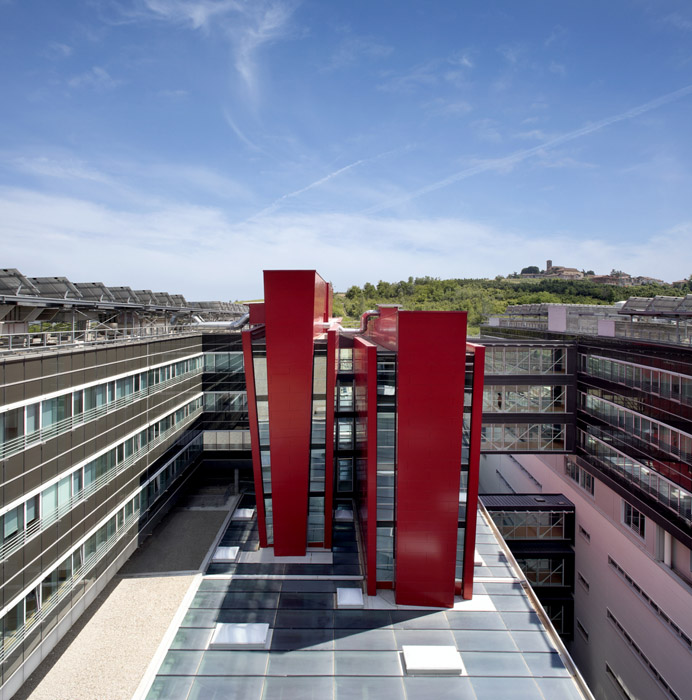 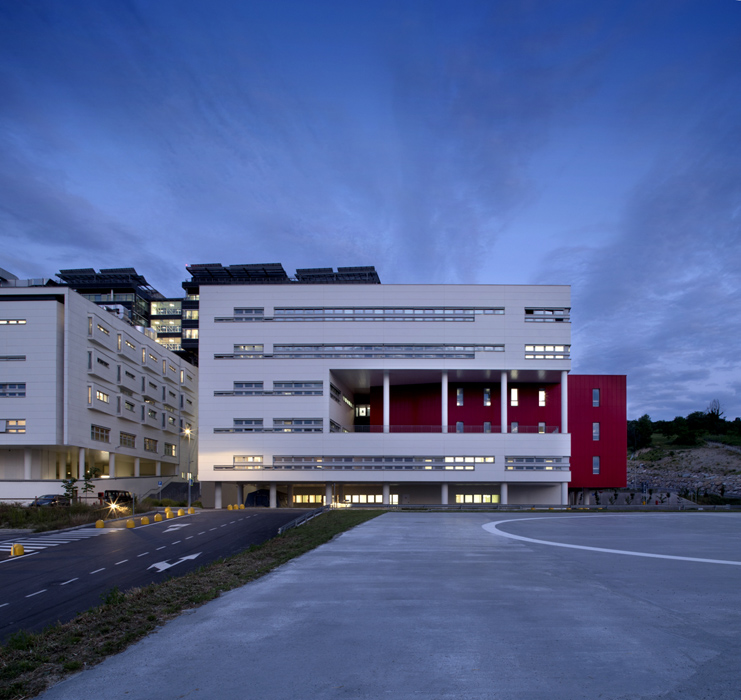 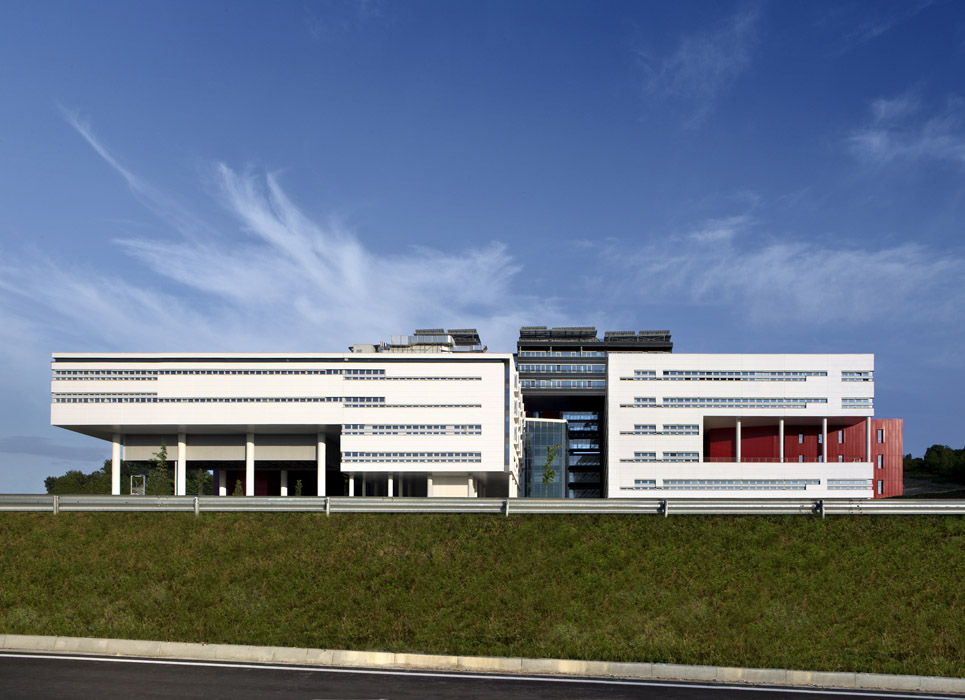 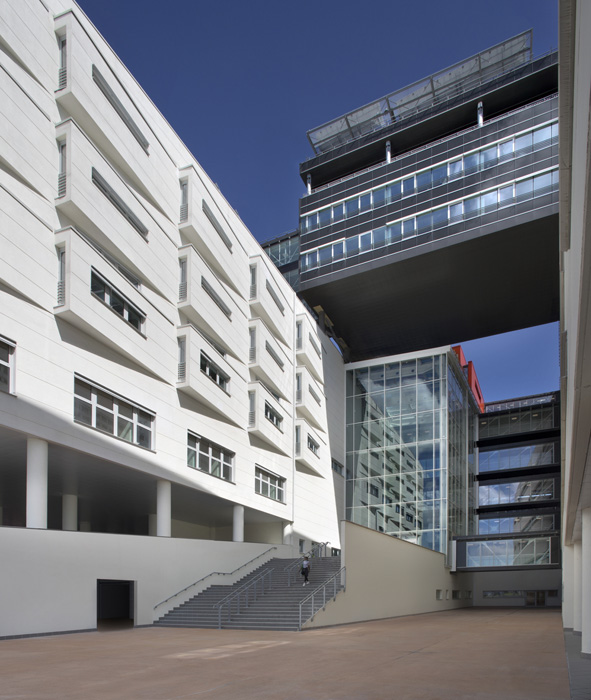 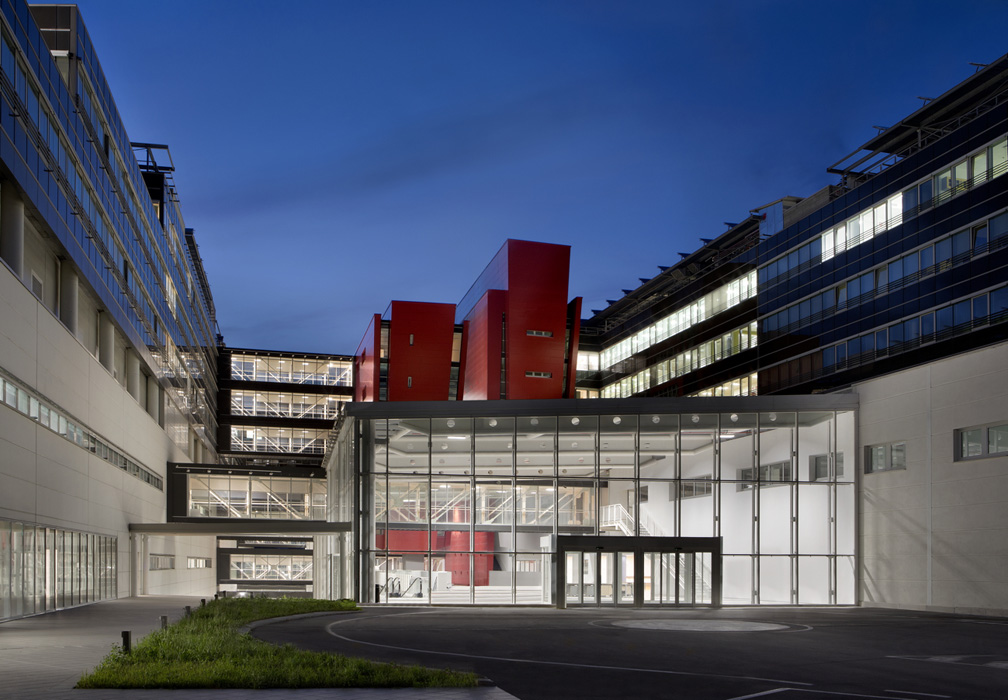 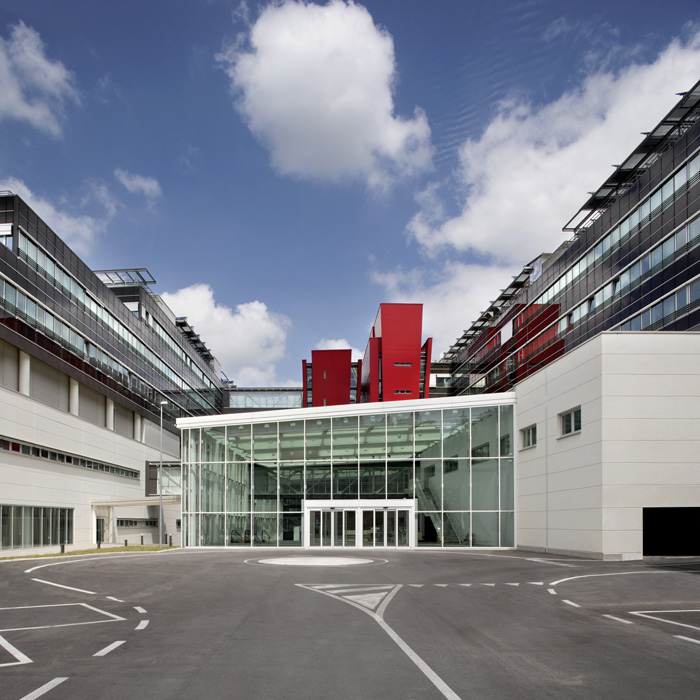 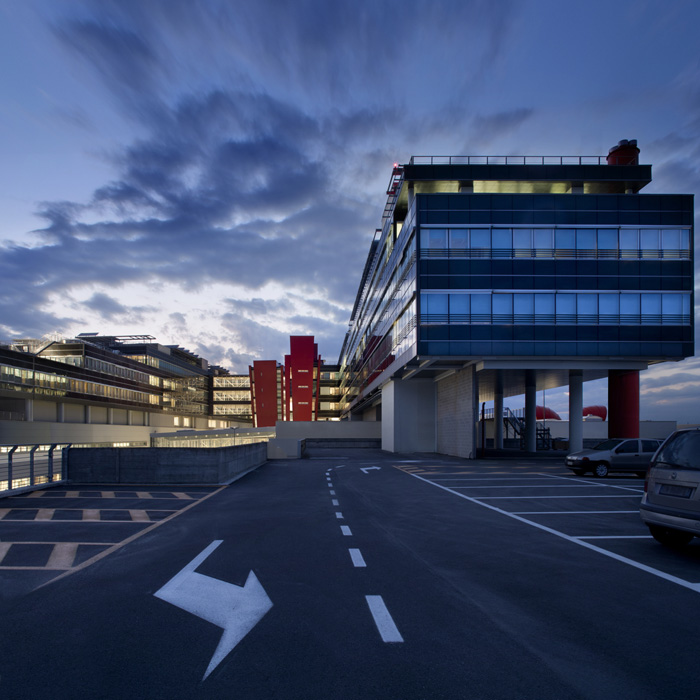 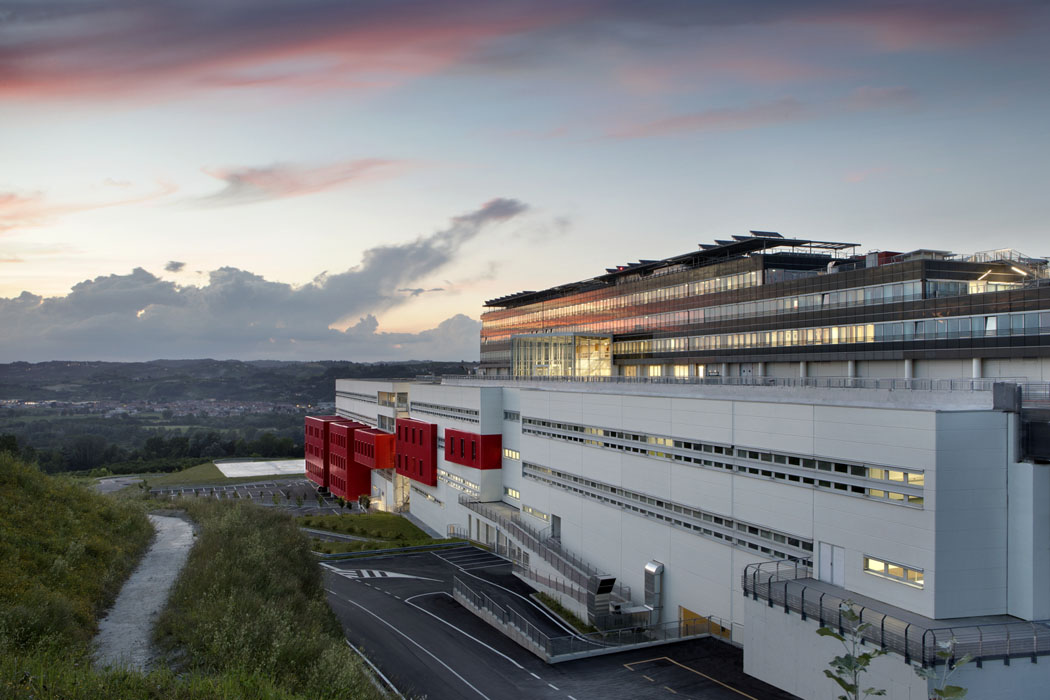 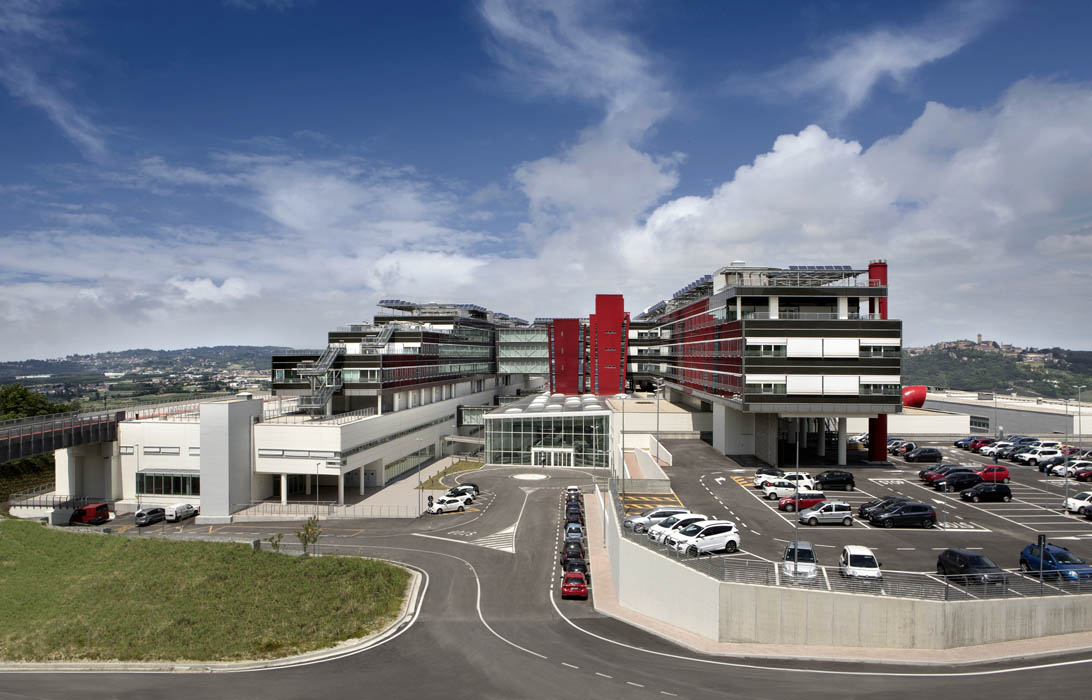 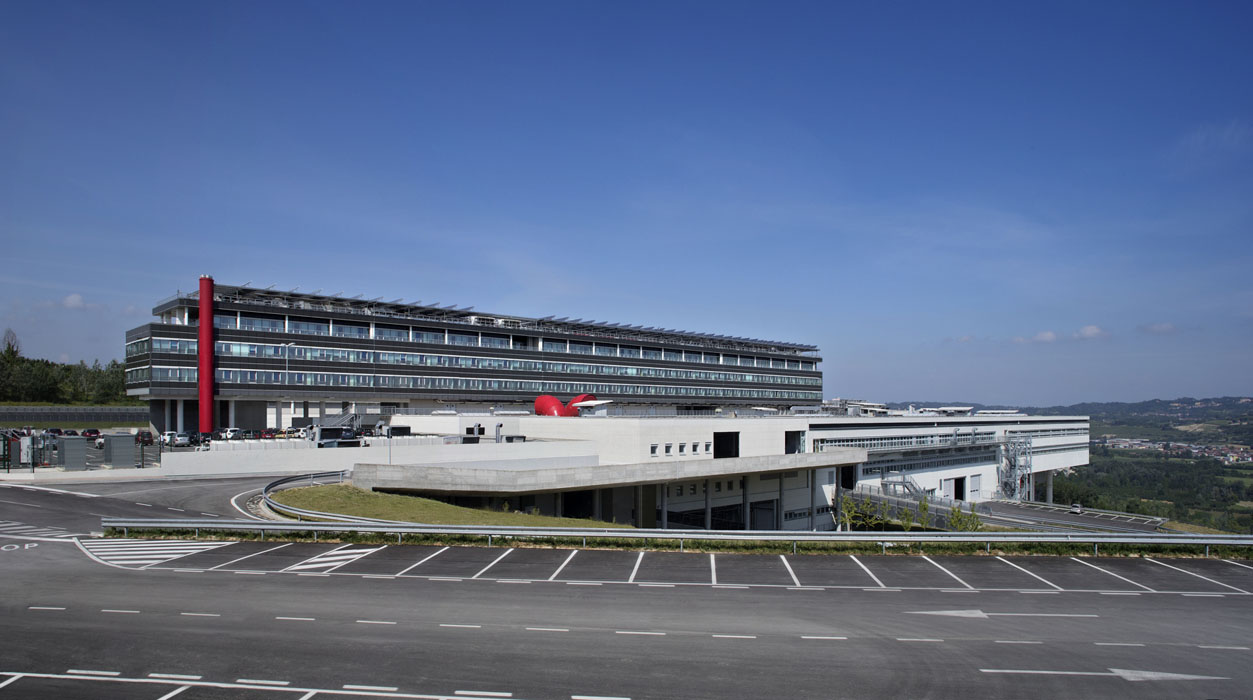 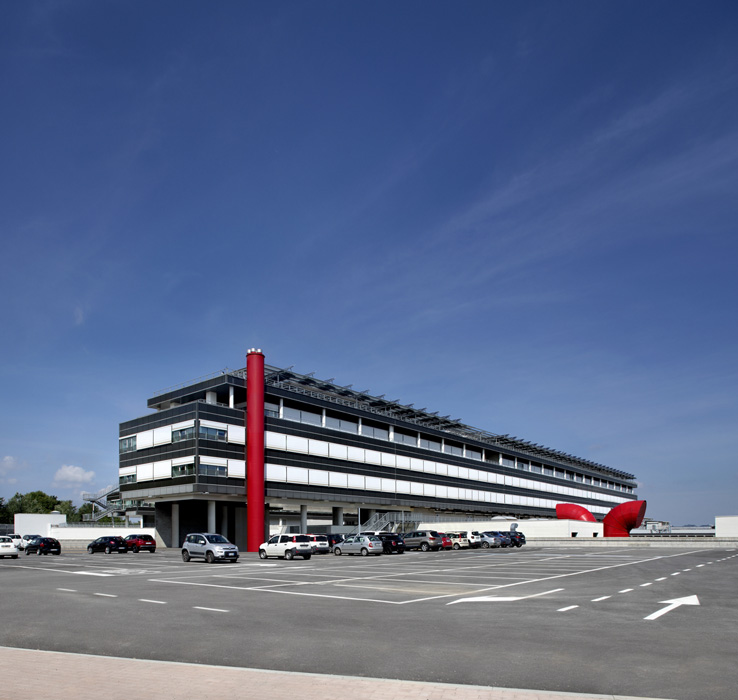 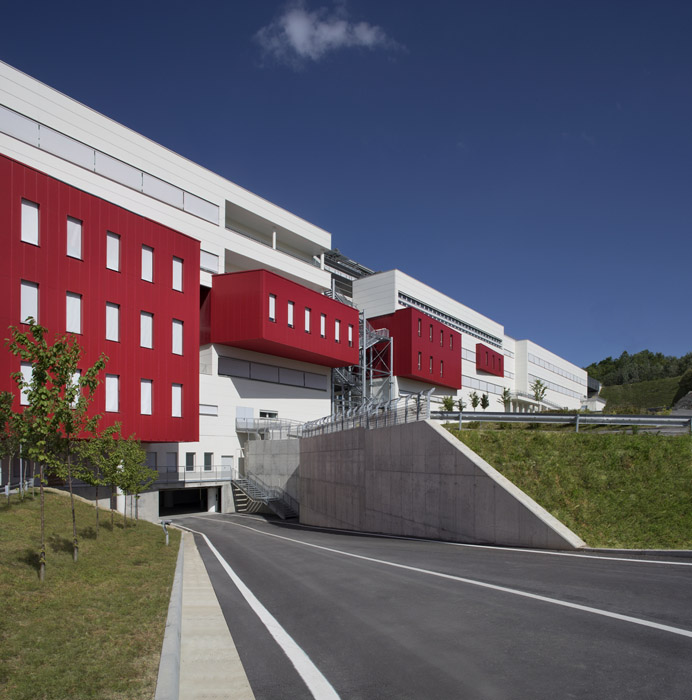 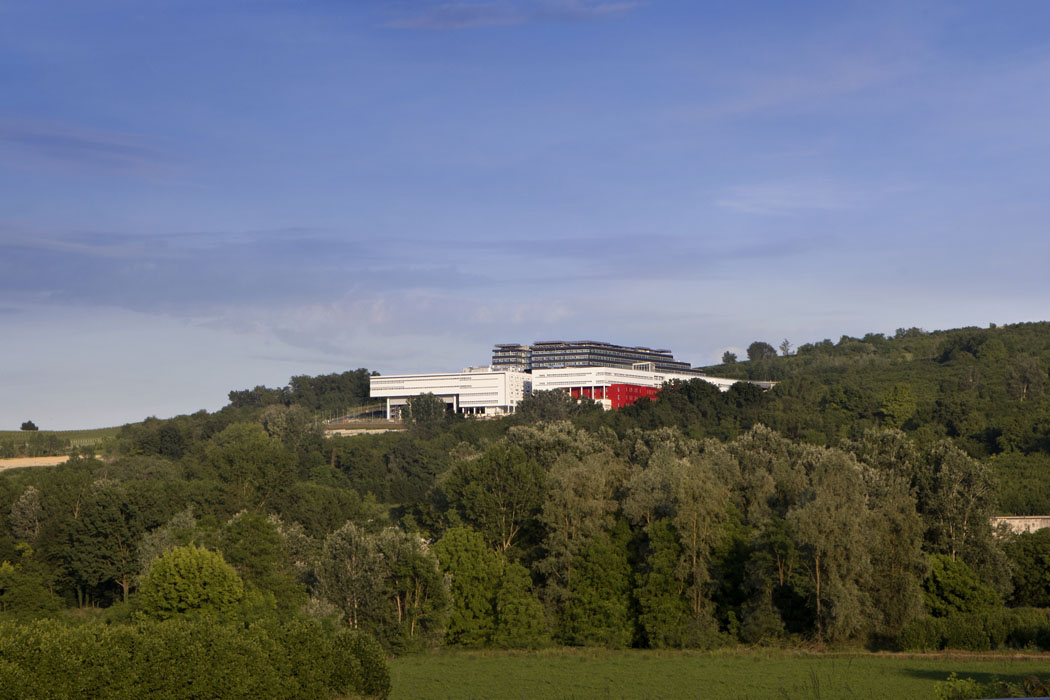 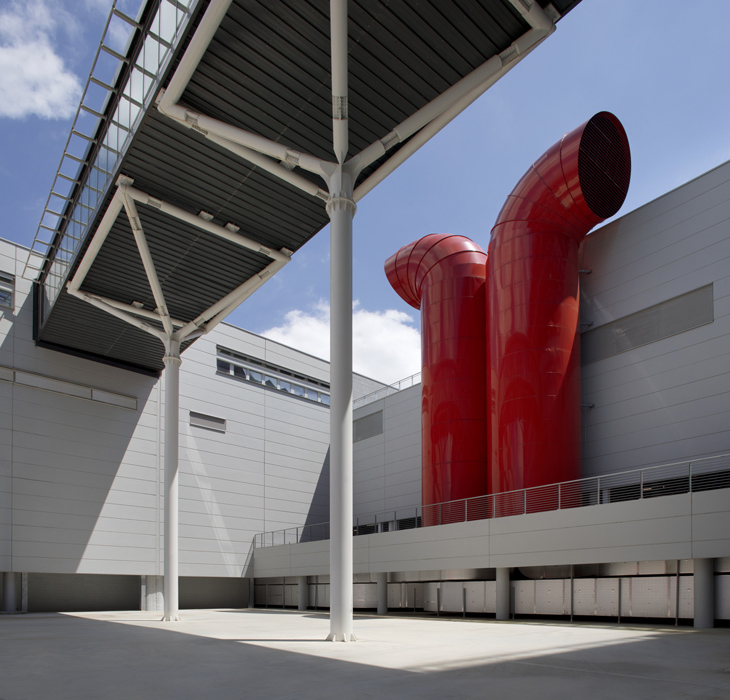 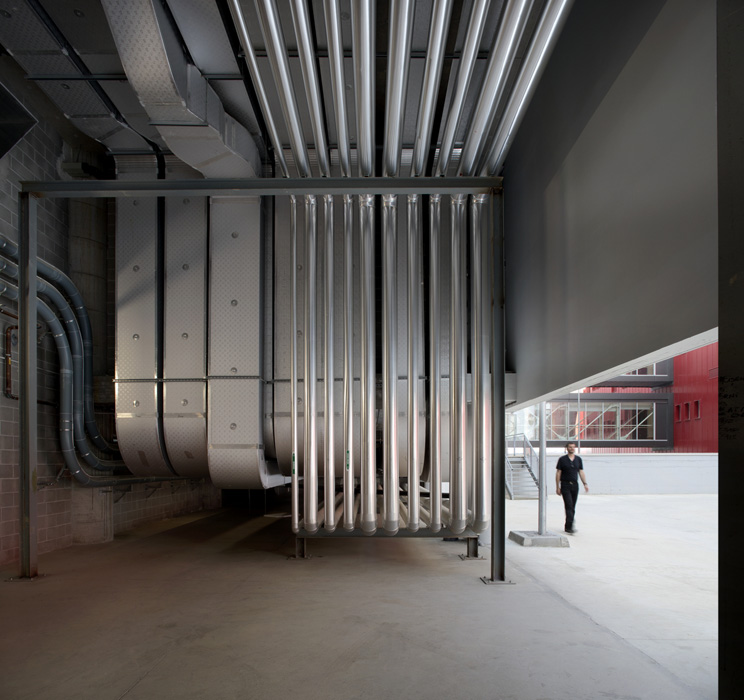 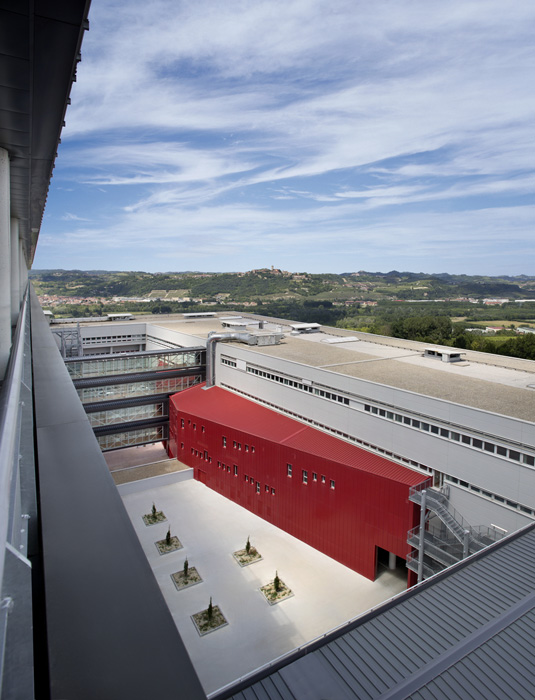 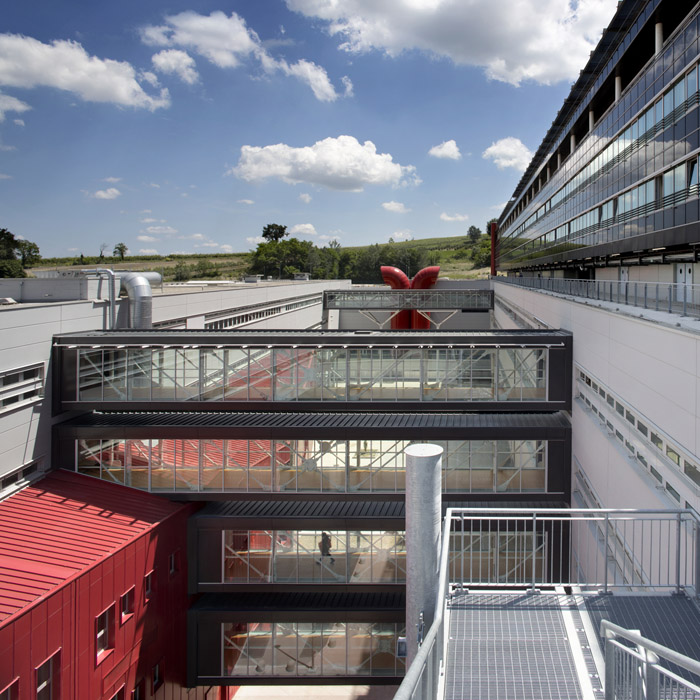 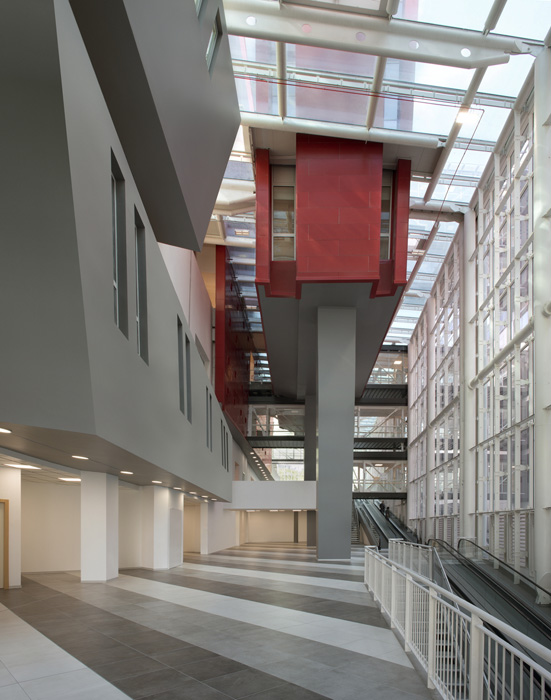 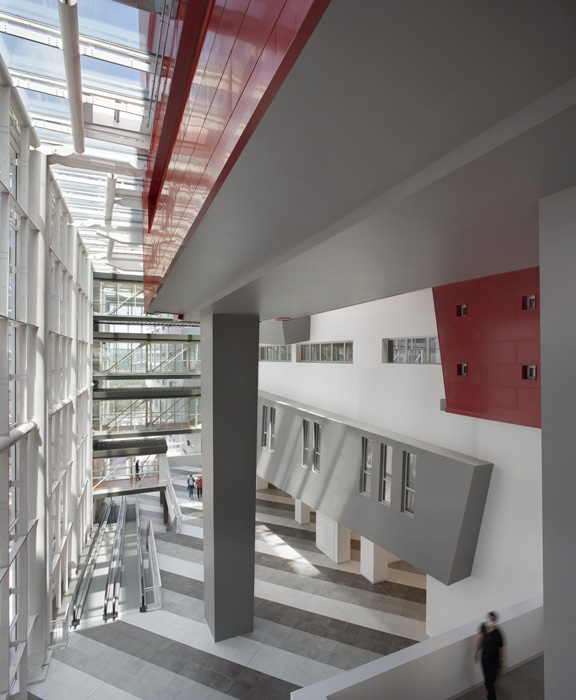 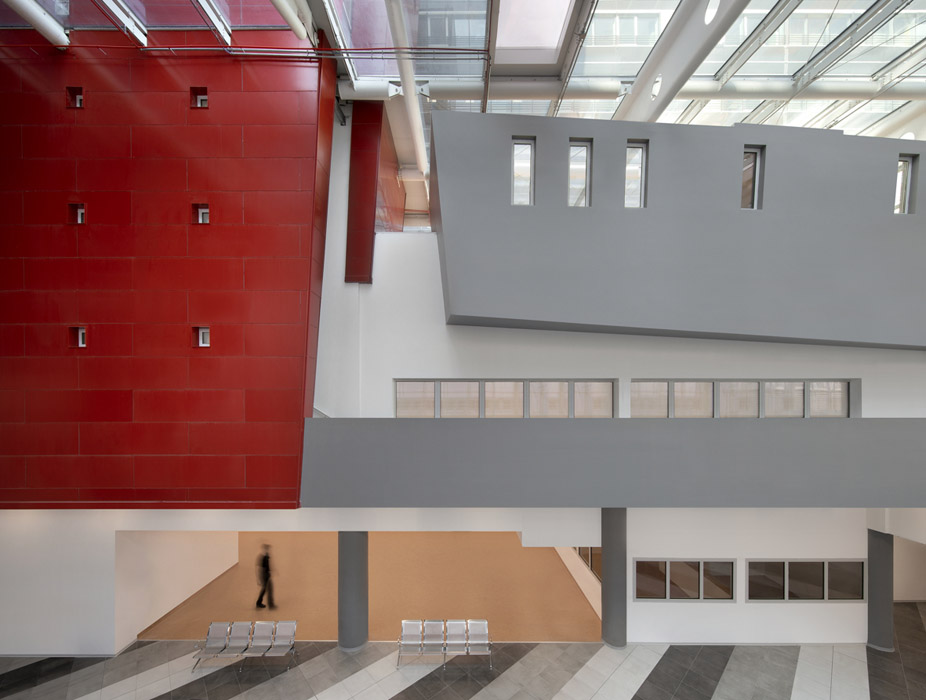 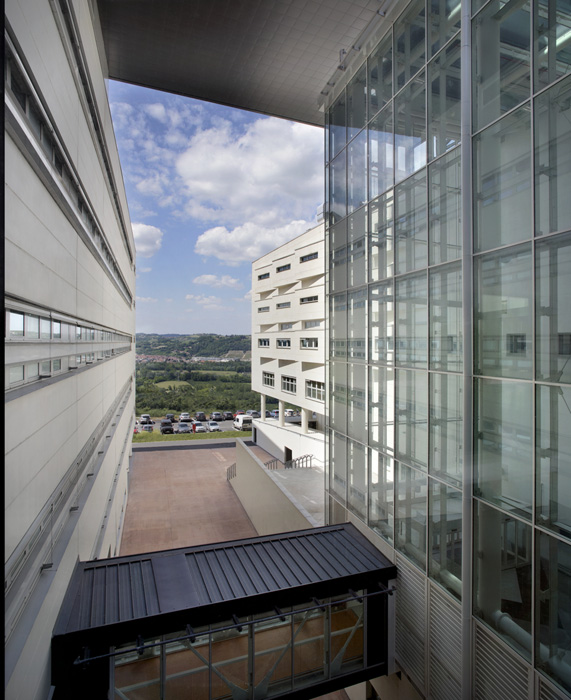 The site is very wide (over 200,000 square metres) and stretches over the northern slope of the hill of Verduno. The idea behind the construction of the Alba-Bra Hospital is based on an innovative concept of a horizontal, rectangular block that breaks away from the  self contained units designed in previous years, and develops the principle of a mainly horizontal organization of space. In particular, this concept promotes intercommunication between wards, an easier adjustment to internal changes and better working conditions. All these improvements are also due to the fact that sunlight reaches all the areas of the building where personnel is stationed , which also leads to improved quality of services for patients.

The general disposition of the Alba-Bra hospital and its functional organization are based on  three very characteristic elements which are :  the “rectangular Block”, “hospital gallery”and the “supported body”. The rectangular block is the most important part of the building. Its horizontal shape is in contrast with the important inclination of the ground. It is made of a series of horizontal slabs of different shapes that go from the 6th floor under the ground to the ground floor where are the medical-technical wards, the emergency rooms and the surgery hospitalization units. It is located at the sides of the “Hospital Gallery” which is the backbone of the building, a wide  reception area that runs through the building from north to south. The Hospital Gallery functions as access to most of the wards and starts from a central vertical pole (staircases, lifts,lifts for stretchers and for goods). This is a fundamental element in the hospital’s organization and makes horizontal and vertical circuits easy to understand and paths easy to follow. Finally, the “Supported Body” is composed of two linear buildings that go from the second to the fifth floor above ground level. These are placed at the sides of the Gallery and host the specialized wards. The doctors’ areas are located in the middle of the structure, closely connected to the in-patients wards.

The architectural design of the internal spaces meets the needs of a hospital building and, at the same time, offers patients and staff a reassuring, bright and comfortable atmosphere.  Elements such as sunlight that penetrates the heart of the building, or the warm effect given by  the materials used, also play a role in reaching the aforementioned objective. The arrangement and atmosphere of the rooms have been carefully studied. A row of lower windows has been introduced to  allow patients who are confined to their beds to  get a good view of the landscape. 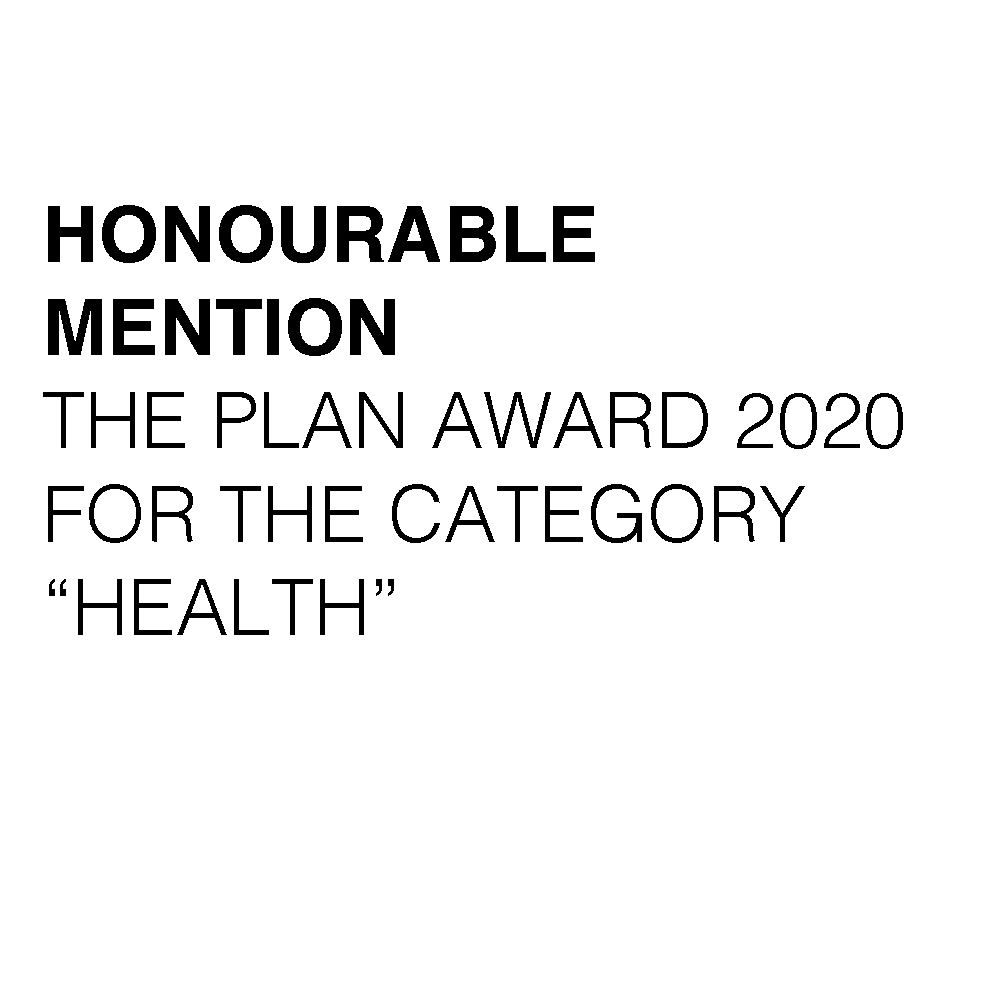